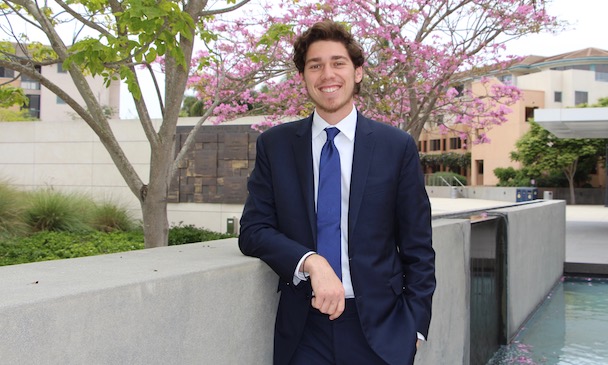 Recent graduate Alexandros “Alex” Stamas is raising the roof on his professional career as a Development Assistant at non-profit lender Century Housing in nearby Culver City. Named LMU’s 2019 Program Scholar for Economics (B.A.), the Sacramento, California native is building upon skills he picked up on the LMU bluff, as well as abroad, to help develop affordable housing for the unhoused and displaced.

“LMU instilled a global compassion within me, as well as a desire to serve, that I hope to foster throughout my life,” Alex, who earned a dual degree in Economics and Finance, said. “It’s given me the ability to think critically and come up with novel solutions to difficult problems.”

Alex is particularly intrigued by the idea that infrastructure, its practicality and design, can be used as a tool for social change – a theory explored in an LMU course he took called “History of Modern Design.”

“We took a very critical look at how design played a key role in shaping cultures and has been used by centralized governments to influence people,” Alex said, citing Great Britain’s 1864 Crystal Palace design exhibition, as an example. “The British were trying to reestablish themselves as a world power via design, but got blindsided by India at the exhibition, and lost.” He indicated the British government instituted a ton of design reform in order to better educate and enrich its general population as a whole.

Alex got to explore the fruits of Britain’s reforms firsthand, taking part in LMU’s London Internship Program. During the course of his stay, he interned at the Estate Strategy Group, doing a great deal of environmental consulting on behalf of the National Health Service (NHS) -- including taking a look at how the public-health service could effectively utilize more renewable energy in their hospitals.

Originally drawn to LMU for its welcoming campus community and top-ranked LMU Bellarmine College of Liberal Arts, Alex said that when he first visited the bluff, he was very impressed by the level of interactions he saw at play between professors and students.

“The attention LMU students get from faculty really puts the academic experience a head above the rest,” he said, specifically pointing out the collaborative relationship he was able to form while taking part in research under the mentorship of LMU Economics Professor Thomas Herndon.

Moreover, he added that LMU provides its students with the appropriate resources to pursue their academic endeavors to the fullest. In his case, Alex was awarded an Honors Summer Fellowship grant allowing him to research the evolving complexities of real estate investment trusts (REITs) --the findings of which would fuel his Honors Senior Thesis.

Outside of his scholarly pursuits, Alex was also an active presence on the campus scene, joining the professional business fraternity, Delta Sigma Pi, and becoming a First Year Retreat leader for LMU Campus Ministry.

“Don’t be afraid to change,” Alex said. “Stick to your values and be open to new opportunities and ideas.”