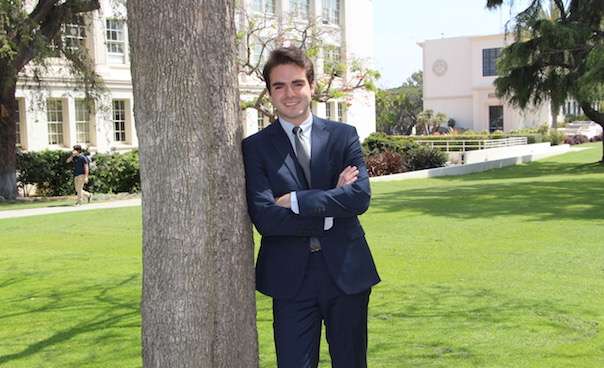 Class of 2019 Valedictorian Alfredo Yei Hernandez takes his LMU spirit to heart and hopes to share it with the world as a proud Lion serving “for and with others.” A native of Los Angeles, Alfredo plans to channel his versatile talents and leadership abilities into a role as a public servant, advocating and creating opportunities for the underdog.

“LMU really cultivated my desire to use my gifts to help others,” Alfredo said, who paired his Political Science major with a minor in Economics. “My education and experiences really impressed upon me the beauty and joy of being selfless.”

The recipient of LMU’s esteemed Ignatian Award for excellence in academics, leadership and service, Alfredo says he was drawn to the bluff for the passion he saw in the Lion community, and its Jesuit values.

“I couldn’t get enough of the environment,” Alfredo said. “I love that it’s a community of human beings living and learning to make the world a better place.”

Second only to community, he added, is the range of opportunities available to students. For instance, one of the highlights of Alfredo’s college career was a semester spent in London working in Parliament and attending classes at the London School of Economics through the Hansard Scholars Programme and LMU’s Political Science department.

“Being in the center of the political ring really made me recognize our limits as people and the limitations of our political structures,” he said, further explaining that his desire to fight for the dignity of the marginalized was reaffirmed by the experience.

Alfredo says his time in Parliament was enhanced by his ability to draw upon critical thinking skills developed in the LMU classroom when crafting arguments -- in particular his “Contemporary Political Theory” course taught by Dr. Lisa Taylor.

“It definitely was one of my most challenging classes at LMU, but also probably my favorite,” he said. “We had to pick one social issue that was really bothering us and examine it in-depth through our own political critical theory lens. It solidified my love for political science and made me realize that I could use my passions in a productive way.”

Moreover, LMU’s commitment to a global imagination was something Alfredo took full advantage of, journeying to Greece through the University Honors Program to tackle independent research on the country’s financial crisis and later to Romania to take part in an archeological dig with the Classics and Archeology department.

Alfredo’s desire to expand his global horizons is no anomaly on the bluff, with more than 36 percent of Lions participating in a Study Abroad program.

Outside of his rigorous coursework, Alfredo was active in a number of campus pursuits, including LMU’s student government, the Associated Students of Loyola Marymount University (ASLMU), holding the positions of Attorney General and Associate Justice, and as Editor-in-Chief of Attic Salt, LMU’s Honors Undergraduate Academic Journal.

Additionally, he was named Program Scholar of the Year for Political Science and is the recipient of a Sr. Raymunde McKay Service and Leadership Award.

Looking beyond the bluff, Alfredo is eager to put his LMU education to work for a local non-profit, with plans for a graduate degree in Public Policy on the horizon.

“Your best resources at LMU are the people,” Alfredo said. “Don’t be afraid to talk to someone you haven’t talked to, open up to people you haven’t – LMU has people that care and that’s not always going to be the case – enjoy that and use it to the fullest extent.”