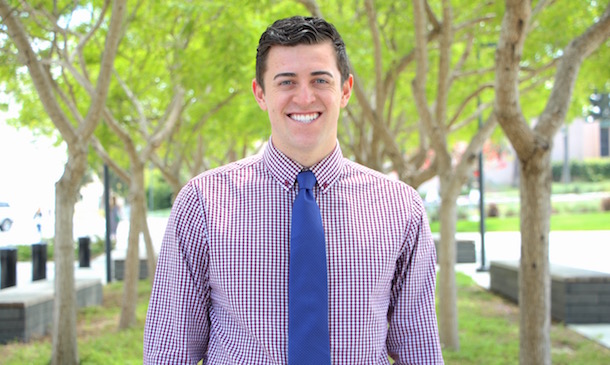 Class of 2017 Theatre Arts graduate Blake Kevin Dwyer is drumming up interest in the Hollywood casting community thanks to an inspired performance in LMU’s Senior Showcase, an event which invites members of the entertainment industry to come and watch graduating seniors show off their acting chops. Thus far, Blake has been contacted by the Vice President of Casting at Fox, several management companies and a commercial agent, among others.

"The hope of the Senior Showcase is that you get some sort of representation to kick-start your career," the San Mateo, Calif. native said, who is still mulling his options.

Most recently, Blake was the recipient of LMU's Father Graham Alumni Award – the highest honor a senior can receive for a devotion to service and leadership.

"LMU gave me a much greater sense of leadership and responsibility in myself," Blake said. "I now know how to express my ideas, handle my peers and communicate in a more effective way. It’s all about constant communication and talking ideas out."

In addition to his coursework, Blake was also President of his fraternity, Delta Sigma Phi, an Orientation leader, Chair of Programming for ASLMU and performed in numerous productions for the LMU theatre department and the Del Rey Players.

Blake says that his involvement with Greek life was a particular highlight of his LMU experience:

"I think that a lot of people come into college with a pre-conceived notion of Greek life," Blake said. "But LMU has a really unique fraternity and sorority scene in that people one wouldn't normally associate with it are taking part, such as engineers, international students, members of the LGBTQ community, etc. It was a really special and unique situation to be gay and president of my fraternity."

During his junior year, Blake ventured to Bonn, Germany for a semester abroad, spending a period training intensively at the world-renowned Moscow Art Theatre. He describes the experience as difficult, but rewarding and recommends exploring one of the more than 60 study abroad opportunities available to LMU students.

Originally drawn to LMU for its size, location and nationally-ranked theatre arts program, Blake says he made the decision to apply to LMU right down to the wire.

Looking to the future, he hopes to become a professional actor and also explore event planning.