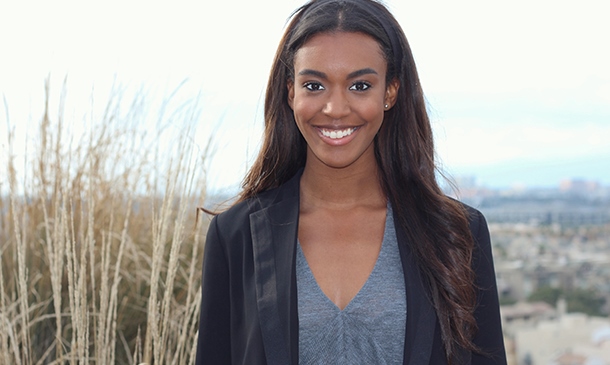 Junior entrepreneurship major India Williams was recently named Miss California USA 2017, beating out 127 other contestants on her way to the crown. The Lafayette, Calif. native will represent The Golden State at the Miss USA 2017 pageant later this year.

“I think one of the reasons I was named Miss California USA was due to the qualities I have picked up over the past five years competing, and of course through my experiences as a student at LMU,” India said, citing the development of strong leadership skills, determination, and a tenacious spirit.

In the coming months, India will juggle her busy class schedule while preparing for this summer’s pageant, the details for which are still under wraps – but is looking forward to the challenge nonetheless.

"I’ve learned to love my planner,” India said.  “Being Miss California is a once in a lifetime opportunity, so I want to make the most of this year and live up to my title."

As with LMU, a tenet of the Miss USA competition is its devotion to community service, something India embraces wholeheartedly. She volunteers often with the non-profit Best Buddies International, whose aim is to create employment and leadership opportunities as well as friendships for people with intellectual and developmental disabilities.

Originally drawn to LMU for its top-rated entrepreneurship program, India says the opportunities it has afforded her so far have exceeded her expectations in the best of ways.

“It’s been incredible,” India said. “Entrepreneurship isn’t a major offered at a lot of schools, and LMU’s program is small, innovative, and full of opportunity for growth.”

One such opportunity was an internship at the Incubator School in Westchester, where India mentored junior high students as they developed their own start up businesses.

Looking to the future, India plans on pursuing law school with hopes of one-day practicing Contract law.  She says it was a freshman philosophy course at LMU that first got her interested in the legal field.

“This class made me realize that there are so many different ways of thinking,” India said, “and ultimately taught me how to be more open-minded. The great thing about LMU is that it comes at your education from all angles.”

As for what advice she has for incoming Lions…?

“Make the most of your time while you’re here,” India said. “I definitely wish I could have more time to dedicate myself on campus.”