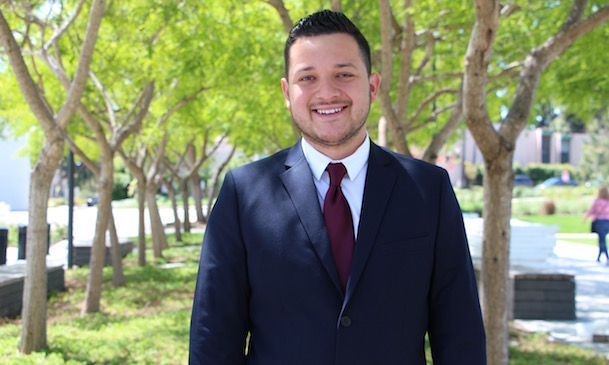 Class of '17 English and Philosophy graduate Javier Navarro is living out the LMU mission by devoting his year to post-graduate service with the Ignatian Service Corps. The Los Angeles native is currently teaching seventh grade religion and first through eighth grade physical education at San Miguel Catholic School in Watts, Calif.

“So far the experience has been challenging, but enlightening,” Javier said. “Being a part of the amazing family that is San Miguel has helped me see that a year of service is much more than just service – it has become part of my moral obligation.”

Javier adds that he is in charge of the school drama club’s production of “Annie” and will also be starting to teach math for sixth through eighth grade.

During his time on the bluff, Javier was president of LMU’s Ignatians Service Organization and co-chair of the Service Organization Council. He would often give back by volunteering at the Guadalupe Homeless Shelter and working with at-risk youths in Juvenile Hall in East L.A. He says he learned of post-graduate service opportunities through his involvement with the Center for Service and Action.

“There are so many people who need our help,” Javier said. “And if we are passionate enough, we can help them in so many different ways, including in the career paths we take. What better way to be a global citizen than by contributing to society’s less fortunate and making your own path bright?”

Originally drawn to LMU for its Jesuit values and prime location, Javier says he was given the chance to pursue a variety of his passions as a Lion, including his love for writing and the theatre.

Pairing his double-major with a theatre minor, Javier wrote a ten-minute play that scored rave reviews and was showcased at last year’s New Works Festival. “Borderline Brotherhood” tells the story of two young brothers who get separated from their parents while crossing the Sonora Desert and are snatched up by human traffickers. The piece touches on themes such as immigration and family, subjects that are near and dear to Javier.

“That I was able to write my short play and have it performed affirmed to me that LMU really can help you accomplish what you love,” Javier said.

Looking to the future, Javier hopes to pursue either his MBA for entrepreneurship or a career in the entertainment industry following his year of service.

“Definitely take advantage of every opportunity on the bluff,” Javier said. “I think we tend to get lost in the midst of schoolwork and extracurricular activities and forget to appreciate the here and now.”