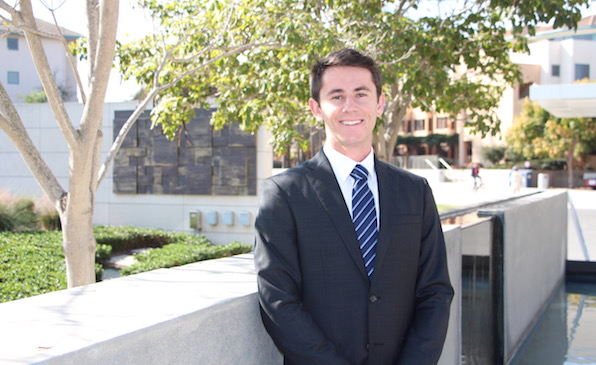 Senior Mechanical Engineering major Joshua Bernardin is set to launch his professional career at Boeing when he graduates this May. A native of Fountain Valley, California, Joshua was hired by the aircraft giant to join their four-year Satellite Systems Rotational program with hopes of one day working as a Systems and Design Engineer.

“Whatever your career goals are in the engineering field, this type of rotational program helps guide you,” Joshua said, who will participate in three to four different rotations, each nine months long.

Along with his rigorous coursework, Joshua says that the office of Career and Professional Development has been key in helping him open doors to the professional world, including through a rewarding internship at Avcorp Composite Fabrication, which he secured at one of their Career Expos.

“CPD has been an invaluable resource for me and I would highly recommend checking out how they can help you prepare to transition from student to young professional,” Joshua said, who worked with Career Coach for Science and Technology Professions Erica Privott on everything from crafting his resume to evaluating his job offer.

Drawn to LMU for its top-ranked Engineering program, smaller size and mission to educate the whole person, Joshua said it came down to “I can see myself here.”

“I feel like I’ve definitely become much more of a leader,” Joshua said. “In general, I just feel like a more well-rounded person.”

Outside of the classroom, Joshua jumpstarted and co-leads the LMU rocket team (Loyola Mars) through the Loyola Marymount Aerospace Research Society. With the help of his peers, Joshua assembled 20+ engineers to build an engine for their capstone project that will go in a rocket next year, and if all goes as planned, blast off to great heights.

“LMU is very close to the aerospace industry, but I felt we could be better connected with it,” Joshua said, who recently applied to make the team an official campus club. “I wanted to create something research and career related for engineers on campus that could continue to grow long after I’m gone.”

Joshua adds that the rocket fuel needed to get the team approved and airborne was provided by Civil Engineering department chair Dr. Don Kendall, who has become a mentor figure to the group.

“The best resource at LMU is without a doubt the professors,” Joshua said. “Get to know them well.”

LMU currently touts a student to faculty ratio of 10-to-1 and average class sizes of just 20.

Additionally, Joshua also found time to study abroad in Bonn, Germany through the Engineering program and was also involved with Creare service organization.

As for what advice Joshua has for future Lions?

“As German writer Johann Wolfgang von Goethe once said, ‘Dream no small dreams for they have no power to move the hearts of men.’”