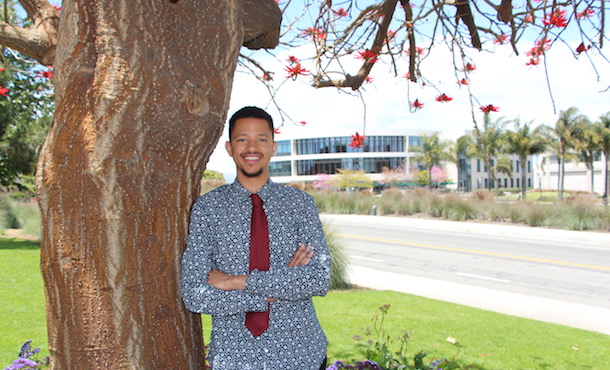 Class of 2019 Health and Human Sciences graduate Makeen Yasar is working to combat health disparity with an inspired antidote -- the Umoja Health Project, a program dedicated to exposing high school students, particularly those of color, to opportunities in the health-related professions. Developed at LMU with help from peers, Makeen hopes to turn Umoja into a non-profit this summer while he forges a path to medical school.

“Umoja,” which is the Swahili term for “unity,” currently operates as an after-school and lunch program at Westchester Enriched Sciences Magnets, offering workshops to sophomore and junior high school students on the allied health professions and health education, academic and college preparedness, and civic engagement.

“I felt like it was my duty to create something that could help change the narrative,” Makeen said, who kickstarted the program thanks to a Strauss Foundation Scholarship. “I was hoping to have an education that would help position me to be an individual who could serve others and enact social change, and LMU did just that.”

Currently, the healthcare industry touts one of the fastest growing job markets in the nation, something Umoja aims to leverage, empowering students from underserved communities with the knowledge and tools to pursue professional opportunities in the field and knock down systemic barriers in the process.

Originally drawn to LMU for its Jesuit mission, in particular “the service of faith and promotion of justice,” Makeen says his time on the bluff reaffirmed his belief that community is the one of the most important things in which a person can invest.

“I feel like I’m leaving LMU with opportunity and a certainty in my abilities,” he said. “Not to mention a bevy of mentors and people who I consider family.”

Makeen says a particular highlight of his college experience was journeying to Ghana to participate in a three-week course on Ghanan Culture, History and African Psychology via LMU’s Study Abroad office.

“Every minute of every day we were learning, traveling, engaging,” Makeen said. “Being the first member of my family to travel outside the country, let alone to Africa, it was a completely transformative experience that I’ll never forget.”

Global exploration is a hallmark of the LMU experience, with 36 percent of Lions choosing to participate in a study abroad program.

Honored with the 2019 James Loughran, S.J. Service Award, Makeen lent his considerable talents and leadership skills to the campus community in more ways than one. In addition to his role as Co-President of Harambe Mentorship program, he was involved as the Community Engagement Chair for the Black Student Union, as an Intercultural Facilitator, a Rains Research Scholar, Teacher’s Assistant for Anatomy and Physiology courses, and as a member of the Praxis Academy.

Looking to the future, Makeen hopes to see Umoja’s framework replicated at schools across Crenshaw, South LA, and Inglewood, as well as use it as a tool to train undergraduate students on advocacy and social justice.

As for what advice Makeen has for future Lions?

“Live a life of purpose, in the sense that your LMU experience is meant to help shape and form you into the person you are going to become,” he said. “And if you want something, don’t be afraid to fight for it.”