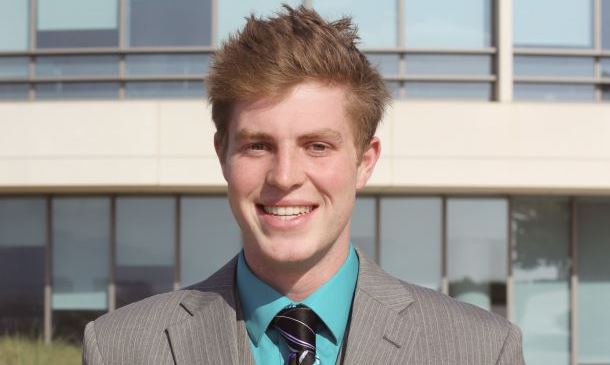 “I came to LMU to do electrical engineering specifically so I could one-day, hopefully work at this company,” Patrick said.  “And quite honestly, I thought I would get to this place 10 or so years down the line – but here I am, right where I want to be, after four years at LMU.”

A native of Sonoma County, Calif., Patrick says it was electrical engineering and computer science professor Ray Toal who put him in touch with Nvidia’s recruiters, opening the door to an interview and ultimately the job.

Patrick says this kind of professorial support is a hallmark of an LMU education, which touts an 11:1 student-to-faculty ratio and an average class size of 21.

“LMU is a Jesuit school all about helping one another, giving back, and working towards something better,” Patrick said.

When originally searching for colleges, Patrick says he was drawn to LMU because it offered a flexible curriculum that would allow him to explore both electrical engineering and computer science – not to mention a campus that is consistently ranked among the most beautiful in the nation.

“At LMU just about anything is possible,” Patrick said.  “For instance, studying abroad is usually something engineering students cannot take part in because their tracks are so tailored, but at LMU you can.”  Patrick took advantage of such flexibility and studied abroad in both Germany and China.

For his senior project, Patrick developed an application using image processing technology that aids in the classroom experience for the visually impaired, making the whiteboard easier to see.  He presented his innovative concept at the 2016 Undergraduate Research Symposium to much praise.

Additionally, Patrick was a member of the University Honors program and the recipient of the John Page Electrical Engineering Scholarship his junior year.

As for what advice he might have for incoming Lions…?

“At LMU everything is at your disposal and the teachers are incredibly personable,” Patrick said.  “All you have to do is ask.”