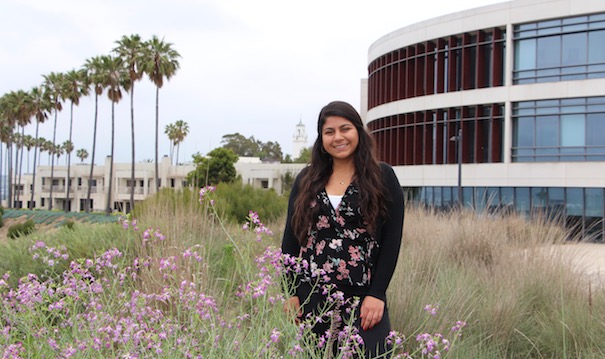 Class of 2019’s Xochitl Pasten is closing the book on her LMU career and embarking on a year of post-graduate service with City Year Los Angeles, a non-profit aimed at providing assistance and resources to schools in underserved communities. The Chino Hills native is eager to channel the knowledge and awareness gained on the bluff into her quest to better the lives of others.

“I’m leaving LMU with a better understanding of myself, the world and my place in it,” Xochitl said, who will work as a teacher’s assistant and mentor for the program. “I hope to be molded and challenged by this experience, to become a resource for my students.”

Earning her dual-degree in English and Chicana/o-Latina/o Studies, Xochitl says she came across City Year’s path while attending LMU’s Community Service Fair, an annual event hosted by the Center for Service and Action, and was immediately intrigued.

LMU currently ranks No. 3 in the nation for “Students Most Engaged in Community Service,” according to The Princeton Review, with Lions devoting more than 200,000+ hours to service pursuits per year.

Drawn to the bluff for its Jesuit values and top-ranked LMU Bellarmine College of Liberal Arts, Xochitl says it was her experience at LMU’s Latino Overnight as a high school senior that ultimately sold her on becoming a Lion.

“Being introduced to the university while surrounded by the Latinx community assured me that I would always have a supportive group of people within reach,” Xochitl said. “I left my visit feeling that LMU was a place where I could not only belong, but thrive.”

The Office of LMU Undergraduate Admission hosts several such events every spring for accepted students, offering a sneak peek at the LMU experience and the chance to connect with current students, faculty and staff.

“It’s truly the people on campus that made LMU feel like my home away from,” Xochitl said. “Moreover, I was not expecting to develop such close working relationships with my professors, which contributed greatly to my overall student experience.”

In particular, Xochitl says LMU Professor of English Rubén Martínez played a key role in her academic and personal development.

“The classes I took with him allowed me to explore my history and identity as an Angeleno, as a Mexican-American and as a human being,” she said. “He became a mentor who helped me become confident in letting my voice be heard.”

She added that among a number of standout academic experiences, an interdisciplinary English and Theological Studies course she took with Martínez takes the cake. Titled “Into the Desert,” the course explored the world of mystics, desert communities/culture, the power of contemplation and solitude, and even included a class trip to the Mojave desert.

“We were immersed in the desert without our cell phones and just the company of each other,” Xochitl said. “It was an experience I’ll never forget.”

In addition to Xochitl’s rigorous coursework, she was also heavily involved on the campus scene, rising the ranks at The Los Angeles Loyolan newspaper to Senior Editor, as a member of Gryphon Circle, an all-female service organization focused on education, and sitting on the executive board for LMU’s Latinx Student Union, among other pursuits.

Looking to the future, Xochitl plans to research and apply to graduate and doctoral programs in Chicana/o-Latina/o Studies while serving with City Year.

As for advice she has for future Lions?

“Take advantage of the many opportunities LMU affords you to leave the bluff and explore the scope of the world around you,” Xochitl said. “For example, Alternative Break trips were one of my favorite ways to delve into social justice issues while immersed in a community grappling with its effects.”