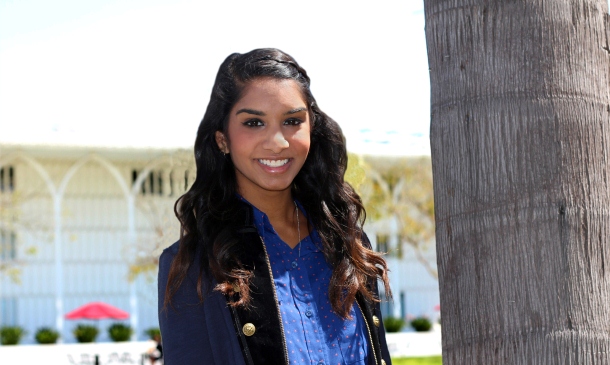 Senior Theatre Arts major Kavita Mehta is living proof that a fine arts degree from LMU can go a long way. In Kavita's case, she recently accepted a position in the highly prestigious Global Shakespeare Program at the University of Warwick in Coventry, England (in collaboration with Queen Mary's College), one of the top schools for drama in the UK.

While there, she will study Shakespeare in other cultures, acting and directing techniques; analyze Shakespearean text, and much more.

"I would like to direct," Kavita said, "and having a strong foundation in Shakespeare will give me a greater understanding of how to approach a play or musical."

The Walnut, Calif. native was originally drawn to LMU because of the theatre department's one-of-a-kind study abroad program in Bonn, Germany, where students have the chance to walk the boards at the renowned Moscow Arts Theatre. LMU's Theatre Arts program is ranked in the top five nationally.

"To be able to study where modern theatre was born," Kavita said, still sounding awestruck, "it's a rare opportunity that isn't offered at any other college."

While there, Kavita was so inspired by Russian theatre, that she started writing a Bollywood adaptation of "A Midsummer Night's Dream," which she eventually directed for LMU's Del Rey stage.

"It was to so beautiful to see my work come to fruition," Kavita said. "My actors and design team really brought my vision to life and the whole experience further inspired me to pursue directing and get my Master's in Shakespeare."

Outside of directing, Kavita has taken on pretty much every behind-the-scenes role - from lighting and prop design, to stage management.

Additionally, she is a member of Tri Delta sorority and had a big hand in starting "Spice," LMU's Indian club.

This year in particular, Kavita stepped up to the plate for her sorority, leading two major Greek events, Lip Sync and Derby Darling.

"My sorority has put a lot of faith in me," Kavita said. "As a theatre major, sometimes it had to come second, so I'm very glad I had the opportunity to become more involved."

Kavita makes the trip across the pond in September, and while she's ready for her next act, she says her experiences at LMU will always be close to her heart.

"Most of all I'm just going to miss the relationships with my professors," Kavita said. "They're not like professors, more like mentors, always there to help me."

As for what advice she has for future Lions:

"Really pursue your dreams and just take as many opportunities as possible," Kavita said. "And make sure to get involved in things outside your major - believe me, it gives you clarity."