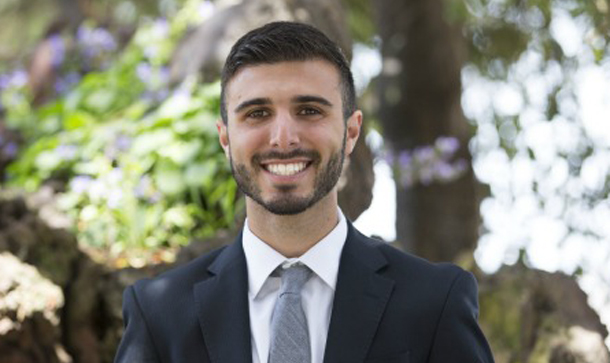 As mechanical engineering major Kevin Kamar winds up his junior year, his sights are set on the summer ahead, particularly the real-world experience he will gain through a second year studying abroad and a highly coveted internship in the swarm robotics industry.

In May, Kevin will travel to China with a class that focuses on ethics for engineers and scientists. Upon his return in June, he will begin an internship with Glendale, California-based Ocean Lab.

"I want to learn as much as possible and get hands-on experience," Kevin said. "That's what companies are looking for."

Kevin, who transferred from Marymount College as a sophomore, traveled to Bonn, Germany last summer through Loyola Marymount University's study abroad program. At the time, he said, "I'm excited to see what else the world and LMU has to offer."

For the Torrance, California native, LMU has opened up a wealth of opportunity.

"I love the university," Kevin said. "I have made so many friends - both local and those from far away. It is not too big or too small, but the perfect size to form relationships."

One of those relationships opened the door for Kevin's upcoming internship. As Kevin explained, "My big brother in Phi Delta Theta suggested I reach out to his father, who plays a big role with Ocean Lab." While Kevin had not previously considered robotics, he quickly "shot over" his resume.

"I don't know what's out there yet - I have peers who are looking at aerospace or materials, and I have always liked the idea of automotive," he said. "I am ready to start applying what I have learned and open to experience in a field I may not have known to consider."

This summer, Kevin expects to spend a lot of time field-testing with devices that work in and out of the water. "It is going to be awesome," Kevin said. "I'll be spending my summer in Catalina - we'll go out there about once a week."

There are also various assigned tasks, such as data entry and helping out around the office. As he explained, Ocean Lab is a small company and that means pitching in. It also means he can gain a lot of hands-on experience.

"There are 3D printers around the office, and I will really have a chance to work on some of my own projects," Kevin said. "They want me to focus on one thing I would like to take away with me, and that would be 3D CAD programming in SOLIDWORKS."

That is not all Kevin would like to dabble in over the summer - he would also like to build a drone.

"I'm excited and nervous all at the same time," he said of beginning his internship. "My whole life, if I commit to something I give it 100 percent. So while I don't know everything, I'm sure I'll learn."

Describing his college experience as one that has flown by way too fast, Kevin said, "I am just trying to take it all in while I can."

As a transfer student, he had to jump right in and make the effort to fit in on campus. "College really is not something you can do alone," Kevin said. "Especially in engineering - it would be too stressful."

LMU has prepared Kevin to work with many types of people and groups, as well as to strengthen his communications skills. He explained that he has benefitted most from learning how to best express his ideas and to also listen to what others have to say.

"I forced myself to talk to as many people as I could in classes and one thing led to another," Kevin said. "Make friends, get out of your comfort zone - it helps you to build confidence."

Kevin is a student blogger for Undergraduate Admission. Read more about his travels and experiences on the Admission Blog.