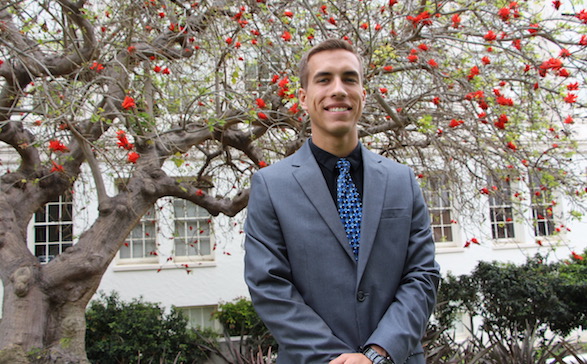 Class of 2018 Mechanical Engineering graduate Clayton Wikoff is preparing to takeoff for Air Force pilot training come January. A native of Taft, California, Clayton will be stationed at Laughlin Air Force Base near Del Rio, Texas and hopes to pursue a career in the military as an officer and pilot.

A decorated ROTC Cadet while on the bluff, Clayton credits LMU’s program with paving his runway to success.

“LMU’s ROTC has a great training program for the Air Force,” Clayton said. “It’s a huge part of why I chose to attend.”

The Air Force Reserve Officer Training Corps (AFROTC) is a military leadership program that gives students the opportunity to become Air Force officers while completing a degree and without incurring any obligation. Classes cover such topics as military customs and courtesies, development of aerospace power, leadership and communication theories and national defense policy.

“Not only did I develop tight bonds with fellow cadets,” Clayton said, “I came away with strong leadership and professional skills that I believe will serve me well in the future.”

Named LMU’s 2018 Program Scholar for Aerospace Studies, Clayton says that if he decides to pursue a career in aerospace down the line he feels confident that the skills he picked up while a student in the Frank R. Seaver College of Science & Engineering will take him to infinity and beyond.

“The engineering department is a tight-knit bunch,” Clayton said. “There were some really challenging weeks, but it only increased the bond between us as we went through the struggle together.”

Aside from LMU’s solid ROTC program, Clayton says that he was drawn to the bluff for a broader perspective and more diverse points of view, not to mention a student to faculty ratio of 10 to 1.

Outside of his coursework and ROTC responsibilities, Clayton was also involved in several other campus pursuits, including Campus Ministry and The Well, a non-denominational Christian group.

As for what advice Clayton has for incoming Lions?

“Understand that everyone coming in is new too,” he said. “Branch out and try to get to know as many people as possible, especially in your major department and don’t be afraid to step outside your comfort zone.”