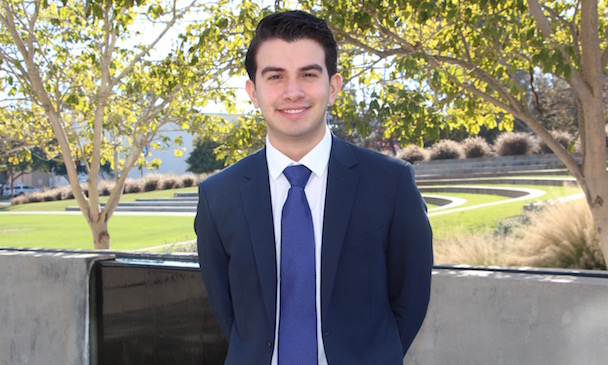 In true LMU Lion spirit, recent entrepreneurship graduate Daniel Gomez pounced on a professional opportunity as soon as he stepped off the bluff. A native of San Jose, Calif., Daniel is currently working as an investment analyst for Palo Alto venture fund NewGen Capital, soon to be known as Fusion Fund.

He says his road to post-graduate success was paved with hard work and preparation, including through his collaboration with LMU’s office of Career and Professional Development while at LMU, and his network of alumni friends.

“One of my friends who was an LMU alum recommended I speak to an investor contact of his regarding professional opportunities,” Daniel said. “It was through this grapevine that I soon found a job.”

Daniel describes his current role as involving deal-sourcing, portfolio management and surveying the viability of different startups in order to decide whether or not they have market potential.

“Essential for a successful start-up is a large enough market for the product, a solid team and making sure that team is going to be able to handle the hurdles along the way,” Daniel said. “There’s a lot of volume – we really have to filter through it all and find the diamond in the rough.”

Originally drawn to the bluff for its top-ranked entrepreneurship program and close proximity to the burgeoning tech hub of Silicon Beach, Daniel says his expectations as a Lion were always exceeded.

“I was able to sort of jump-start everything professionally through my relationships with CBA’s Professor Lewis Jaffe and Dr. David Choi,” Daniel said. “Both helped me get my first two internships.”

Daniel adds that close working relationships between professors and students are characteristic of an LMU education – easy to come by with a student-to-teacher ratio of 11 to 1.

Outside of his courses, Daniel was a founding member of LMU’s Entrepreneurship Society and often took field trips to the nearby Google headquarters and SpaceX.

Looking to the future, Daniel hopes to start his own company and believes his current role is allowing him to learn a great deal about venture fund ecosystems and what opportunities exist and are on the horizon, such as artificial intelligence and augmented reality.

“I would say go to as many start-up related events that you can and be a part of the community early on so they can see you grow. By the time you graduate, they will have had a chance to get to know you.”