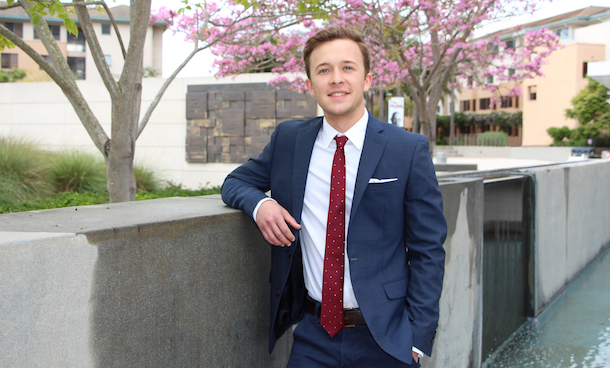 Five, four, three, two, one…  post-grad LIFTOFF! Class of 2019’s Donner Schoeffler rockets to the California Institute of Technology this summer to begin his post-doctoral studies in aeronautics. Named LMU’s 2019 Program Scholar for Mechanical Engineering, Donner plans to further his expertise in the field before blasting his professional career to infinity and beyond.

“LMU prioritizes the education of the whole person,” Donner said. “And it’s definitely something I’ve benefited from.”

Originally from Lake County, California, Donner says that LMU’s proximity to the aerospace industry afforded him a wealth of opportunities for networking and career exploration, including a two-year internship at the Aerospace Corporation in nearby El Segundo.

“It was a great way to build upon engineering principles I learned in the classroom,” Donner said, spending much of his internship researching electric thrusters in Aerospace’s propulsion science department.

Drawn to campus for its nationally-ranked LMU Frank R. Seaver College of Science of Engineering and prime location, Donner says one of his greatest takeaways from the bluff is his sharpened communication skills, courtesy of such Core curriculum classes as “Philosophy, Ethics and Justice,” and meaningful collaborations.

“In general, when working with folks in the STEM fields there can be issues with communication,” Donner said. “But we were given plenty of opportunities to develop our skills through high-level discussion, meetings, group projects, etc.”

He added that a particular highlight of his LMU experience was participating in the SAE Aero Design competition. Over the course of two school years, Donner and a group of his peers designed and built a radio controlled aircraft capable of taking off and landing, among other mission requirements. The team’s efforts resulted in an eighth place overall finish in the international competition and second place among American universities.

“The success we had was a consequence of competence and a lot of hard work,” Donner said.  “The opportunity to put engineering principles into practice is one of the key aspects of LMU’s major.”

Ranked #18 in the nation for “Best Undergraduate Engineering Program,” according to U.S. News & World Report (2019), majors are immersed in a research and practice-oriented curriculum that prepares them for both graduate studies and leadership roles in the industry.

Outside of Donner’s rigorous coursework, he was also President of the American Society of Mechanical Engineers (LMU Chapter), among other pursuits.

“There are so many great opportunities at your disposal on the bluff,” Donner said. “Take advantage of many, but also leave time to just enjoy the college experience.”