Emmett Barnes: Elements of a Scholar 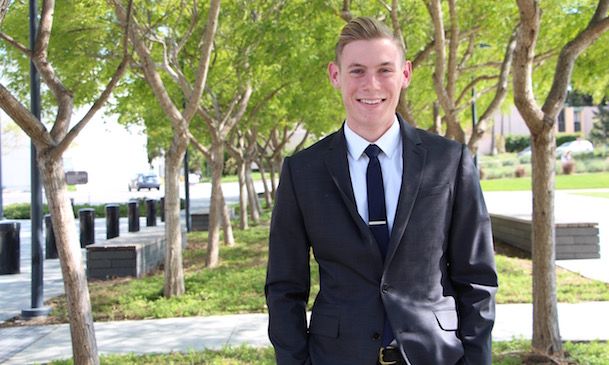 Junior biochemistry major Emmett Barnes is taking full advantage of the many opportunities available to undergraduate students on the bluff, including the chance to perform research – a rarity at many larger institutions. In fact, this past summer he dove into not one, but two summer research projects, the outcomes of which will be presented at LMU’s Undergraduate Research Symposium this spring.

“My summer research incorporated a lot of different aspects of the University I love,” the Davis, Calif. native said. “Not only did I get to improve and expand my academic understanding of subjects for which I’m passionate about, but I got to work alongside friends.”

The first of Emmett’s research projects is concerned with the search for a form of stored renewable energy by looking at the catalysis of water oxidation, while the second deals with the reduction oxidation reactions of chemical compounds.

Throughout the research process, Emmett has had the guidance of LMU chemistry and biochemistry professor, Dr. Emily Jarvis. Such a close working relationship between student and professor is not an anomaly on the bluff; LMU prides itself on providing small class sizes, with 11-to-1 student-to-teacher ratio.

Originally drawn to LMU for its Jesuit ideals, welcoming community and professors who take a genuine interest in the well-being of their students, Emmett says his experience has far exceeded his expectations.

“I think I’ve really taken LMU’s mission statement to heart,” Emmett said. “Specifically, the encouragement of learning and education of the whole person. Not only have I learned a lot of new academic information, but I’ve learned a lot about myself.”

In addition to his rigorous coursework, which also includes a sociology minor, Emmett is involved a number of campus pursuits, including a role as tour guide coordinator for the Office of Undergraduate Admission and as a member of the service organization Magis.

Among his service placements, Emmett volunteers at a local domestic violence shelter where he tutors first and second graders in reading and writing and strives to be a positive male role model in their lives. He says the experience has solidified his desire to become a pediatrician.

Looking to the future, Emmett is starting to study for the MCAT, with hopes of attending medical school directly following his time at LMU.

“I’m eager to use my understanding of science and people to improve the lives of others,” Emmett said.

“Don’t be afraid to explore your passions,” Emmett said. “LMU has come to feel much more like a home-away-from-home than I ever expected.”