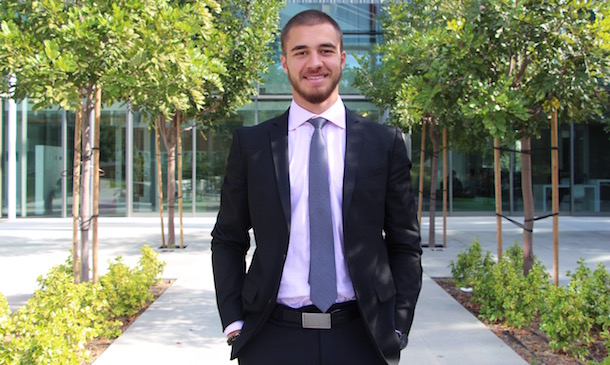 Junior Enrico Sala has never been one to take the backseat. In fact, since journeying from his native Brazil to attend LMU, he has wholeheartedly embraced his talent for leadership and is flourishing in ways only a Jesuit education can provide. He credits his success to the efforts of the Office for International Students and Scholars (OISS), who equipped him with the tools to start his academic career out on the right foot.

“LMU’s International Orientation was key in helping me feel prepared for the first day of school,” Enrico said. “I almost felt like I came to know more about life on the bluff than the incoming American students.”

Enrico has taken this know-how and applied it not only in the classroom, but to a wide range of campus pursuits, including roles in student government, as student manager for OISS and as vice president of Delta Sigma Phi fraternity, which he calls one of his most enriching LMU experiences thus far.

“Participating in Greek life has shaped my college experience in a very positive way,” Enrico said. “I view it as never having to take a cab from the airport again, as my second family -- and it has been key in helping me get more involved with both domestic students and people with majors outside my own.”

The son of a Brazilian race car driver, the self-professed Porsche aficionado says his interest in engineering was a result of growing up at the race track and always being around cars.

“I’m drawn to mechanical engineering’s creative side,” Enrico said. “I want to come up with new solutions for problems, design tools and products for consumers. And if I want to be creative and innovative I need to be working in America. Everywhere else would just be mimicking.”

Originally drawn to the bluff for its Jesuit values and top-ranked engineering program, Enrico has nothing but praise for his experience so far:

“Getting so much hands-on experience in my engineering courses has been really wonderful,” Enrico said, adding that he appreciates the small class sizes and strong working relationships between students and faculty.

Looking to the future, Enrico hopes to pursue a career in product development after he graduates, a role that would afford him ample creativity.

“If not with cars, I wouldn’t mind working in the toy industry,” Enrico said.

As for what advice he has for new Lions, including international students?

“Being involved is key,” Enrico said. “As an international student, you are only going to have a true LMU experience if you take part and step outside your comfort zone.”