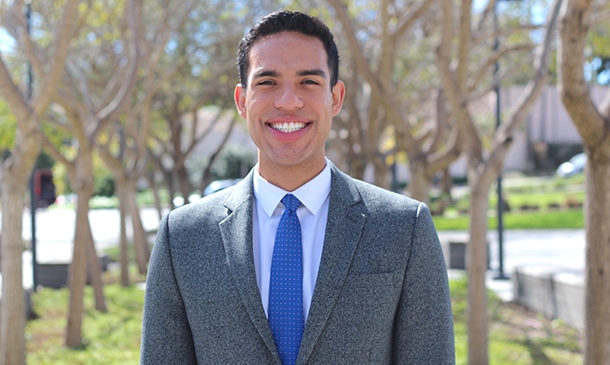 Senior mechanical engineering major Gustavo Castillo has yet to march away from the bluff with his diploma but has already signed on to work for auto-industry titan General Motors in their global propulsions department. The Santa Clarita, Calif. native will be a member of “The Track” engineering program, GM’s two-year grooming process for young engineers on the rise. He previously interned for The Moog Aircraft Group and Tesla.

Gustavo first appeared on GM’s radar at last year’s SHPE conference (Society of Hispanic Professional Engineers), where he competed in a 24-hour engineering challenge on the GM-sponsored team. Gustavo’s team ended up placing first and he walked away from the competition with the Extreme Engineer Award and a job interview.

But Gustavo credits much of his success to LMU’s office of Career & Professional Development, who he says helped whip his resume into shape and perfect his interviewing skills.

“I found CPD to be pretty indispensable,” Gustavo said. “I do not think I would be experiencing the same level of success had I not had their guidance.”

Gustavo, who is also an Economics minor, says he was originally drawn to LMU for its ideal location, top-ranked engineering program, and dedication to service and social justice. He is interested in environmental sustainability, especially where the auto industry is concerned, and was afforded the unique opportunity of researching the subject at the UK Summer Institute at the University of Exeter the summer following his freshman year.

“LMU has done a really great job of making me curious about the world and want to affect it in positive ways that go above and beyond,” Gustavo said.

In addition to his studies, Gustavo is also team leader of LMU’s Rocket Team. The group recently had the opportunity to present one of their designs to the CEO of Aerospace Corporation. He is also a member of the Jesuit Association for Student Personnel and Administrators.

Looking to the future, Gustavo hopes to one day pursue his MBA and shift into entrepreneurship. But for the meantime he is just looking forward to touring Europe this summer with his sister.

As for what advice he has for incoming Lions…?

“Get as involved as you can on campus, discover what you are passionate about, and reach out to people.”