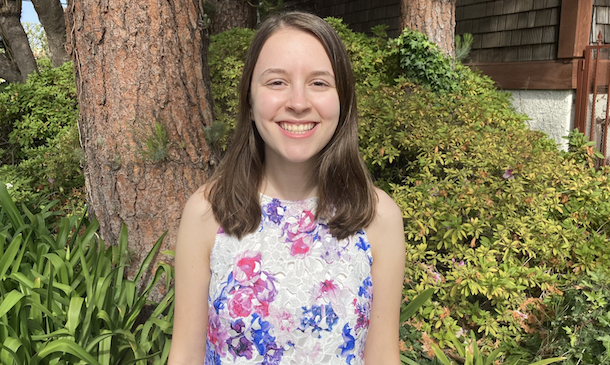 Madelyn Louis '21, who earned her bachelor's degree in computer science from the top-ranked LMU Frank R. Seaver College of Science and Engineering, is plugging into her professional career as a software engineer for Google in nearby Venice, Calif. The Ashburn, Va. native was recently named LMU’s University Scholar of the Year, an award that recognizes the graduating senior who has the most outstanding academic record.

What’s the algorithm to her success?

Louis says it began through her participation in LMU’s Google Computer Science Summer Institute (CSSI) Extension program, a summer experience for incoming first-year students who plan to study computer science and related STEM fields. Taught by Google engineers and LMU faculty, Louis said this first step into her LMU experience led to a range of academic and pre-professional growth opportunities, including several summer internships with the tech company.

“My LMU experience not only solidified my passion for computer science but gave me the leadership and public-speaking experience to head into my next chapter with confidence,” Louis, who minored in Asian Pacific Studies, said.

When she initially began her college search, Louis says that it was LMU’s website that first caught her eye and made her want to learn more.

“You can tell a lot about a company or institution through its website,” she said. “LMU’s is bright and bold and gave me an immediate sense of the school’s atmosphere.”

She says that her interest grew after discovering LMU’s proximity to L.A.’s booming tech scene and that it offered several dynamic programs in the STEM fields. A campus visit soon followed.

“I know it’s sort of cliché to say, but when I toured the campus, it was sort of love at first sight,” Louis said. “I remember touring the computer science lab, and I could just see myself really fitting in and studying here.”

Outside of the realm of computer science, Louis says her first-year seminar course, “Imagining the Resilient City,” taught by Professor Eric Strauss, left a lasting impression on her in more ways than one.

“It was all about the idea of urban resilience and building cities with environmental sustainability in mind, and not just creating structures we are going to destroy in twenty years,” she said. “Thematically, it sums up the experience of a Jesuit education well — to build a better world, future, with purpose and resilience.”

In addition to being a member of LMU’s University Honors Program, Louis was active in several student clubs and organizations. She was co-president of the Association for Computing Machinery (ACM), the world’s first educational and scientific computing society, and she was a member of Juggler’s Unite, a juggling club on campus.

As for what advice she has for future LMU Lions?

“When I first began my LMU journey, I didn’t think I’d take up juggling as a hobby or learn to speak Japanese,” she said. “Go into your LMU experience with an open mind and seize the opportunities that come your way. You never know where they might lead.”