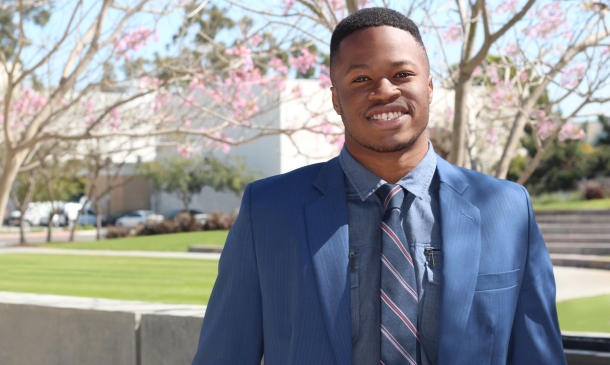 Senior Michael Erike is celebrating a different kind of Sweet 16 -- the finance major has been accepted into no fewer than 16 law schools, including programs at Duke University, University of Notre Dame, and University of Michigan.

Michael, who hails from Mesa, Arizona, has yet to make a final decision as to which school he will attend, but high on his list is Arizona State, which is a doubly sweet opportunity thanks to a full-ride scholarship and the close proximity to his family.

Regardless of which program he chooses; Michael believes LMU has given him the tools to succeed:

"LMU has taught me it's not just about learning your discipline but getting a broader sense of the world and then applying it," Michael said. "I feel blessed to be coming out of an environment where one learns how to positively affect the world and see how everything is connected."

Originally an electrical engineering major, Michael switched to finance after deciding he wanted to practice corporate and intellectual property law one day.

"I wanted to develop a solid understanding of accounting and finance," Michael said. "Everyone has a responsibility to their shareholders, and my role would directly tie in. I'm very interested in helping to protect ideas, and the people who come up with ideas."

Michael admits preparing for the LSAT was no easy feat and says he started studying for it his sophomore year.

"When it comes to preparing for the LSAT, one has to learn how to manage their time wisely and decide where priorities lie," Michael said. "Last summer I was studying five hours every day."

In addition to his rigorous coursework, Michael was President of the LMU Law Society, participated in the Undergraduate Research Program and played several intramural sports.

"Number one thing, be open," Michael said, "don't be set in your academic path. And know the difference between struggling aimlessly and struggling towards a purpose,"