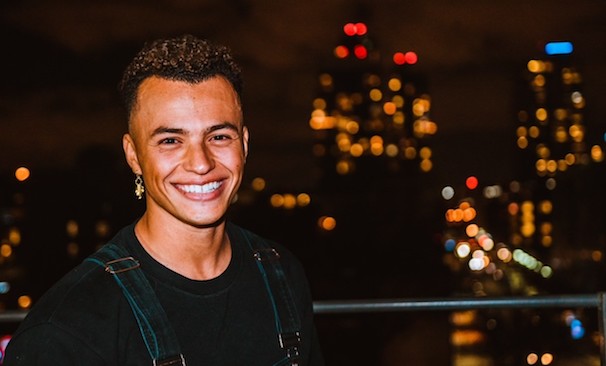 Senior Taydin Macon’s search for answers is reaping him awards at the crossroads of intellectual and philosophical inquiry.  He was recently honored with the LMU physics department’s inaugural Jeff Sanny Award, a recognition given to a student who has made significant contributions to LMU’s academic community through assisting professors as a TA, recruiting, or community-building.

“It feels great to have your hard work recognized,” Taydin said. “It tells me that I’m making a difference.”

During his sophomore year, Taydin experienced an epiphany about the two disciplines that intrigue him the most: physics and philosophy.

He was majoring in physics at the top-ranked LMU College of Science and Engineering when he took a course in philosophical inquiry that struck a chord with him. Suddenly in his physics classes, he philosophically thought about the ramifications of the proofs his professors were explaining. And rather than choose between them, he decided to become a double major.

“I realized I’d be missing out on so much if I were just to choose one over the other,” Taydin, who sees a common theme between physic and philosophy, said. “Both involve problem-solving and aim to answer similar questions —why are we here, and how is it that we’re here?”

Beyond the problem-solving aspect of physics, Macon is drawn to the math.

“It can be very difficult, but when you step back and look at it all, it’s so elegant and beautiful,” he said.

Taydin has immersed himself in the physics department's activities, where he’s been a regular fixture as a teacher’s assistant, lab assistant, and tutor since the beginning of his sophomore year.

“This is a relatively small department, so it’s important for all of us to contribute,” he said. “It also helps to reinforce the material I’ve learned.”

Taydin grew up in Tehachapi, California, a small mountain town about two hours from Los Angeles. He fell in love with LMU after a visit to the campus during his junior year of high school and hasn’t looked back. Ultimately, he plans to go to graduate school, but first, he would like to spend time in the workforce.

“I feel a calling to help people and am looking to the nonprofit sector to help fulfill that calling as I gain work experience,” he said. “I’ve had so many opportunities to explore so many different things and interact with so many different people at LMU. It’s opened my eyes to all that’s possible.”

In addition to his academic pursuits, Taydin has been an active member of LMU’s Society of Physics Students —serving first as secretary and this year as vice president of the campus club.