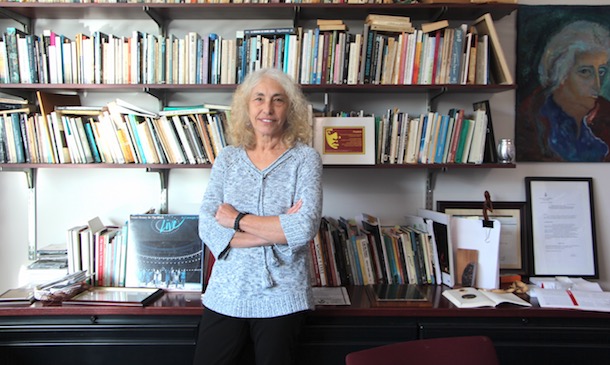 Like a phoenix rising from the ashes, LMU professor Alicia Partnoy, Ph.D., ascended to the bluff from political strife in her native Argentina two decades ago with social justice on her mind. If you were to step into one her Modern Languages and Literatures classes today, you would see her wings still burn bright.

“The students have really kept me inspired,” Partnoy said. “Teaching at LMU has been an amazing opportunity to educate creative minds, draw people to the university from Latin America and have a platform to speak on issues dear to my heart.”

An esteemed poet and human rights activist, Partnoy was just a university student when she became one of Argentina’s “disappeared” due to her championing of certain political causes and was subsequently imprisoned in a concentration camp amidst deplorable conditions. She chronicled her experiences in her book, “The Little School: Tales of Disappearance and Survival.” Widely-regarded by critics and readers alike, the book was used as evidence in the trials against genocide perpetrators in Argentina.

Nowadays Partnoy calls LMU home, her office flush with natural light and filled with books and art. She teaches a wide range of courses, including "Latin American Poetry," "Latin American Short Stories" and "Hispanic Cultural Studies" and likens her teaching style to the pedagogy of Brazilian educator and philosopher Paulo Freire, in which the teacher learns from his or her students in the process of instructing them, the interchange of information ever flowing.

“Our job as teachers is to figure out the worlds that exist in each of our students – to nurture and let them blossom,” Partnoy said.

Partnoy tries to thread as much creativity into her classes as possible. For instance, in her short story class students write short stories based on historical moments throughout history. Many of the pieces have gone on to be published in LMU’s Spanish journal, “La Voz,” for which Partnoy is also an advisor.

“It’s important to me that my students leave my class with the ability to really read, go deeper and pay attention to the historical context in a text,” Partnoy said, describing her pupils as incredibly respectful and open-minded.

Likewise, in her "Latin American Poetry" class, students read works written by inmates from a local immigration prison, which has helped to highlight the many pitfalls and intricacies of the immigration process in the current political climate.

“There is a real diversity in our student body,” Partnoy said. “And the yearning to give back to the community and beyond is very inspiring.”

Partnoy is the author of several acclaimed poetry collections, including “Revenge of the Apple.” Excerpts of her work have been shared on the walls inside subway cars in New York, Dallas and Washington D.C., and were sung by a cappella group Sweet Honey in the Rock. Additionally, Partnoy’s work has been a two-time Pushcart Foundation Writer’s Choice Selection and a London Times best-seller. She is also a former Vice-Chair of Amnesty International and member of the Board of Directors of PEN-West.