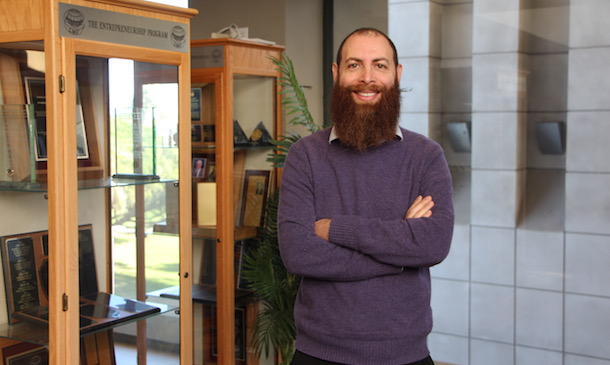 Associate Professor of Finance David Offenberg calculates success in the classroom by enriching students with hard knowledge and the business savvy sought after by employers. Hailing from Phoenix, Arizona, Offenberg’s efforts recently won him the Financial Management Association’s (FMA) Innovation in Teaching Award, widely considered the most prestigious honor for finance professors in the country. Offenberg was selected based on his work in his “Entertainment Finance” course – the only one of its kind offered to undergraduate finance students in Los Angeles.

Launched in 2014, Offenberg’s course is results-oriented with an eye toward industry networking, helping both students and entertainment executives identify qualified applicants for entry-level positions. In any given semester, half of his students land jobs or internships – most recently at industry leaders such as Marvel Studios and Lionsgate Entertainment..

“My career goal is to make LMU the world’s leading institution in Entertainment Finance,” said Offenberg, who still feels surprised and humbled by his win. “It’s special because it comes from the biggest organization of finance professors in the country, so to get that kind of recognition from your peers is great.”

His innovative teaching approach – Applied Financial Modeling with Peer Critiques – equips students with the ability to not only compute results, but to communicate them effectively to employers. He says he was inspired by the methodology of fellow LMU colleague, Dr. K.J. Peters, who employs a similar approach to teach writing in his English courses.

Originally drawn to the bluff in 2006 for its top-ranked College of Business Administration and close proximity to the entertainment industry, Offenberg’s commitment to student success is characteristic of the LMU experience, which currently touts average class sizes of 19 and a student to faculty ratio of 10-to-1.

“I always encourage my students to engage with alumni working at companies and with employers that interest them,” Offenberg said, citing LMU’s strong network of 95,000+ alumni, 220 of whom are former students from his Entertainment Finance course. “We have terrific alumni in every part of the world who are not just willing to help fellow Lions – they actually want to help.”.

Additionally, Offenberg teaches courses in theoretical and applied corporate finance and for the nationally-ranked MBA program. Outside of the classroom, he organizes the LMU Entertainment Finance Alumni Network and is the founder of the annual California Corporate Finance Conference, an event recently hosted on the bluff.

“Take advantage of all L.A. has to offer – time is short here,” Offenberg said. “Get motivated and work at least two internships before you graduate.”