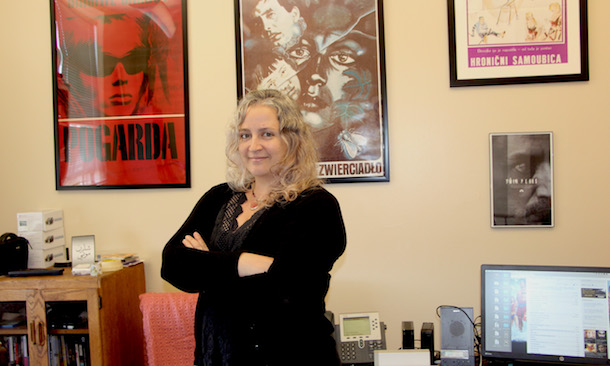 Assistant Professor of Film Production Sharon Mooney aims to help aspiring student filmmakers develop their voices behind the camera and in the editing room in order to create stories that resonate beyond the bluff. Mooney, an accomplished filmmaker and producer from Richmond, Va., has been making movie magic at LMU for five years and rolling.

“There’s a wealth of opportunity at LMU, such as our industry internship program headed by Matt Mills,” Mooney said, who received her MFA in Photo, Video and Related Media from The School of Visual Arts. “Not to mention the nearby professional opportunities available in Hollywood and Silicon Beach.”

Describing her own work as a hybrid of filmmaking and video art, Mooney says creative experimentation is a hallmark of her classes and something she actively encourages students to explore in their own work. For instance, in her “Editing and Finishing the Short Film” course, Mooney’s students edit and package a short film they’ve shot, getting hands-on experience with everything from sound design to color correction to creating an interactive press kit for film festivals.

“A career in film production demands passion and the willingness to work long days and nights,” Mooney said. “But the chance to be creative and share your voice with others can make it all worth the sacrifice.”

Additional courses Mooney teaches include “Introduction to Post-Production,” “Intermediate Production” and “Advanced Editing,” among others.

Drawn to LMU for its nationally-ranked LMU School of Film & Television and the chance to develop close working relationships with students, Mooney quickly discovered LMU to be a passionate network of leaders and innovators.

“LMU students are absolutely amazing and up for anything you throw at them,” Mooney said. “I’ve taught at three college-level places and our Lions are by far the best students I’ve had – and many go on to have work premiere at festivals, such as one of my students who just premiered her thesis film at the Palm Springs Film Festival.”

Mooney says at times it seems that the current generation of student filmmakers are lacking when it comes to a sense of film history.

“They don’t actually seem to watch that many movies, especially the classics,” Mooney said. “But watching films, from the best to the worst, is essential in understanding story and the different nuances of editing. For example, there are some films where I totally don’t connect with the story or characters, but the editing is brilliant.”

Mooney’s own short films and installations have been featured at a number of festivals and galleries including European Media Art Festival (EMAF), Antimatter, Crossroads and the Athens International Film Festival. She currently has two short films in consideration for the festival circuit, and will be shooting a third in August.

As for what advice Mooney has for future Lions?

“Be open to stepping outside your comfort zone and don’t take the resources at LMU for granted,” Mooney said. “There are so many people here on the bluff willing to help you achieve your goals.”