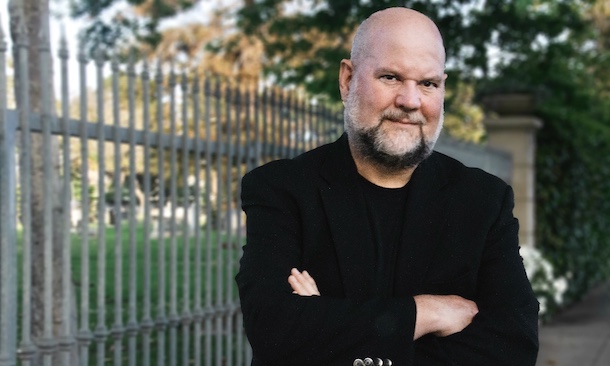 Kevin Wetmore, Professor of Theatre Arts for the top-ranked LMU College of Communication and Fine Arts since 2005, aims to give his students the world — in every sense of the word. With areas of expertise in Japanese theatre, African theatre, Shakespeare, and stage combat, among other specialties, Wetmore provides students with the acting, writing, directing, and critical thinking skills to confidently take to the global stage.

“LMU’s Theatre Arts department prepares students to work in a global industry,” Wetmore said. “We teach you to do theatre all around the world.”

Originally drawn to LMU for its Jesuit values and vibrant community of faculty scholars and artists, Wetmore says that in the classroom, he encourages students to collectively explore and discover the truth in dramatic and film texts through discussion and collaboration.

He teaches a range of courses, including “Stage Combat,” “The Witch on Stage,” and First-Year Seminars including, “Apocalypse on the Stage and Screen” and “Stage Fright: Horror and Terror in the Theatre,” among others.

“In my classes, we engage with how culture is created, how we engage with it, and how to think critically about both,” Wetmore said. “For example, in ‘Stage Fright: Horror and Terror in the Theatre,’ we explore how fear is represented in dramatic works, how we represent the things we as a culture are afraid of through art. It’s not just about what scares the individual, but rather, what scares us as a culture.

In addition to his teaching duties, Wetmore is also artistic director for LMU’s Shakespeare on the Bluff summer festival, which kicks off its fifth season with performances of “Julius Caesar” on June 24 and 25 and “The Tempest” on July 22 and 23. Following two years of virtual performances, the festival returns to its original in-person format on LMU’s new Drollinger Family Stage.

“The very definition of theatre is that it’s live, and the performers and the audience are all in the same space together,” Wetmore said. “And that’s what I missed on Zoom, that sort of immediate feedback from the people watching.”

Presented by LMU Theatre Arts in the College of Communication and Fine Arts, Wetmore says that the shows will feature more than 30 performers, including LMU undergraduate and graduate students, alumni, and some guest artists, including those from other universities.

As in prior years, Wetmore said, the festival selected two Shakespeare plays, one serious (“Julius Caesar”) and one fun (“The Tempest”). Wetmore will direct “Julius Caesar,” which examines the power of rhetoric to move a mob to violence, while Jane McEneaney will direct “The Tempest,” Shakespeare’s second-to-last play that tells a story of redemption and the magic of a performance to heal.

“One of the things that we’ve always encouraged is for our audiences not to be passive, but to clap, boo the villains, cheer the heroes. That just fuels the actors,” Wetmore said. “The audience is the only thing that you can’t rehearse. It’s so exciting to be back in front of them.”

Wetmore added that the 90-minute plays are family-friendly, free, and open. The shows start at 8 p.m. PT. Reservations are requested in the event of changing COVID-19 policies and protocols; RSVP here.

As for what advice Wetmore has for incoming LMU Lions?

“College isn’t where you find yourself; it’s where you make yourself,” he said. “Evolution is a conscious choice. Strive to work together with your fellow Lions to build a more equitable, just community and world.”

Wetmore earned degrees from Bates College, the University of Leeds, and the University of Pittsburgh, where he completed his doctorate in Theatre and Performance Studies. Additionally, he is LMU’s resident stage combat choreographer and the Director of LMU’s MFA Program in Performance Pedagogy.