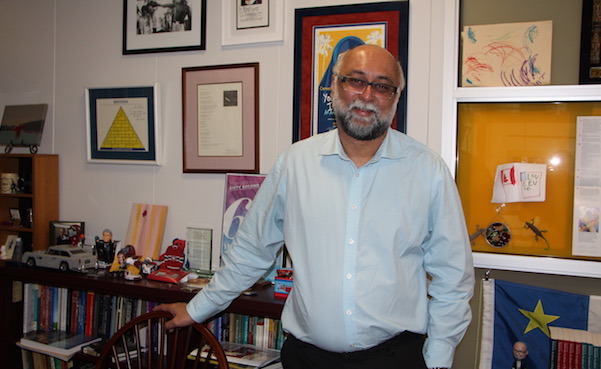 LMU Professor of Theological Studies Dr. Amir Hussain leads students on a global crusade for the why in a society increasingly concerned with the how. Specializing in Islamic studies, Hussain strives to create educated citizens of the world by exploring religious traditions through a 21st century lens.

“I think what connects all religions is that they offer people a way of being in the world,” Hussain said, who migrated from Pakistan to Canada as a young child. “What makes them different are their answers to the ‘why’ questions.”

Hussain says growing up in Canada provided little opportunity to explore his family’s Muslim tradition, but that interest in his faith sparked anew while studying English Literature at the University of Toronto. Struggling to interpret a text, Hussain’s literature professor urged him to use the bible as a key to understanding the nuances present.

“If you are going to read one book to understand Western culture, it’s the Bible -- the great code,” Hussain said. “The discovery inspired me to learn more about my own religion, Islam.”

Hussain describes the Quran as a poetic text, “Shakespeare for Muslims,” keen on telling what its stories mean through evocative language, whereas the bible is more narrative-driven.

Receiving both his master’s degree and Ph.D. from the University of Toronto’s Centre for the Study of Religion, Hussain taught for several years in the California State University system before he was drawn to LMU in 2005 for its smaller size, strong liberal arts culture and top-ranked LMU Bellarmine College of Liberal Arts.

“The real appeal of the Catholic intellectual tradition is their commitment to education and interfaith work, and LMU is no exception,” Hussain said, adding that the university was eager to bring his insight into the classroom for the post-9/11 era.

Describing LMU students as a smart, happy bunch, Hussain says that having grown up in a multi-ethnic world surrounded by a diversity of religions, most are very eager to learn about the religious traditions of others.

“The way in which religion is being lived out in the world is reflected back on students,” Hussain said. “If a great shift occurs, such as after 9/11 or the changing political environment, the interest in religion increases.”

With a slate of courses that includes “Religion in the Modern World,” “Islam in America,” “Comparative Theology,” “Religion and Film” and “First Year Seminar: Islam and the Building of America,” among others, Hussain says he aims to give students the tools to negotiate the events that occur in their lives.

One observation he has made over the years is that people are always eager to point out the differences between two religions but fail to realize that oftentimes the internal diversity within one religion is far more interesting and revealing than that of two separate faiths.

“I admire many religions,” Hussain said. “The older I get the more Hindu I think I’m becoming with their notion of Karma, and then there’s the Buddhist notion of suffering, which is ‘I am often the reason for my own suffering.’ I’ve also formed very deep connections with folks from the Jewish tradition and their daily rituals.”

Outside of the classroom, Hussain is heavily involved with Campus Ministry and is a Faculty Advisor for both the Women’s Basketball team and the Muslim Student Association.

Most recently, he ventured with campus rabbi Zachary Zysman and a group of students to Israel on an interfaith pilgrimage led by LMU Campus Ministry. During the trip, the group visited various holy sites for the three Abrahamic religions, allowing for rich interfaith dialogue and reflection.

Such journeys of discovery and exchange, whether it be cultural, religious or service-oriented, are a hallmark of the LMU student experience, which currently ranks 19th in the nation for “Best Quality of Life,” according to the Princeton Review.

As for what advice Hussain has for future Lions?

“Our students are engaged and want to make a difference,” he said. “Come and be engaged, get involved, aim to understand more of the world through the LMU experience and yourself.”